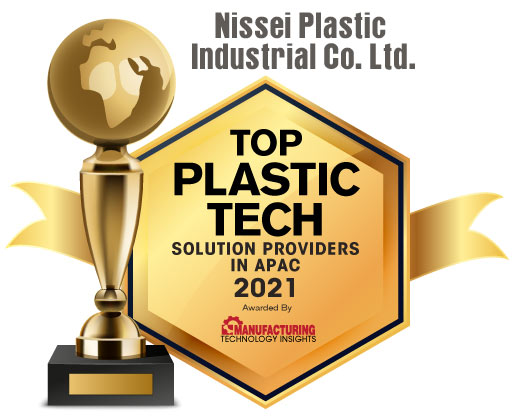 Hozumi Yoda, President and CEO
It is now widely recognized that most plastics are discarded in various forms without being recycled. Many of them are buried in landfills, disposed of in the sea, or burned as they are, emitting carbon dioxide. In addition, marine pollution such as microplastics has become a serious problem. In response to this situation, various movements are emerging around the world to regulate disposable plastic products. “These events will not only make plastics a bad name, but will also bring industries and people involved in plastics into disrepute and undermine the benefits that plastics will bring to humanity,” says Hozumi Yoda, President and CEO, Nissei Plastic Industrial Co., Ltd.

As a company deeply involved in plastics, Nissei Plastics Industries Co., Ltd. aims to achieve harmony between plastics and the global environment and realize a sustainable society. To respond to the growing concerns around the use of plastics, Nissei has introduced an environmentally friendly molding solution. Hozumi Yoda notes, “We believe it is our job to develop and propose injection molding technologies that increase the production volume of products using polylactic acid resin (PLA) and promote the use of biodegradable resins.” As an environmentally friendly resin, PLA is made from corn. When buried in the ground, PLA decomposes within a year. However, PLA has inferior fluidity, heat resistance, impact resistance, and transparency compared to today’s mainstream petroleum-based resins, making it difficult to use PLA immediately as an alternative resin. Moreover, the cost of its manufacturing is higher than that of ordinary plastic manufacturing. Evidently, it is a challenge for the plastic industry to balance the realization of a sustainable society as an environmental measure and profitability.

In this regard, Nissei has developed “N-PLAjet,” an injection molding system exclusively for PLA that overcomes the issues of heat resistance and impact resistance through research in cooperation with various specialized institutions. Nevertheless, because biodegradable resins are still expensive, Nissei believes it is important for Japan to take the lead in developing laws and using technologies developed by the company to demonstrate to the public the potential of biodegradable resins in overseas exhibitions and international conferences.

How it All Began…

The idea behind the genesis of Nissei traces back to a time when Katashi Aoki—one of the pioneers and innovators in the Japanese plastics industry—happened to get a piece of windshield glass from a plane sold on Tokyo’s black market after he returned from Manchuria after the World War II. The windshield glass was acrylic resin and plastic that Katashi Aoki saw for the first time, and he was immediately fascinated by its feel and brilliance. Attracted by its characteristics of softening when heated, hardening when cooled, and being able to change its shape when pressed, he started Nissei with the desire to express this material beautifully. He established the company in 1947 in Sakaki-machi, Nagano Prefecture, where the current head office of Nissei Plastic Industry is located.

Based on the management philosophy—“As a global company, Nissei will enrich communities through plastics”—since its foundation, the company has specialized in the narrow field of injection molding, pursuing expertise in depth and expanding and applying the range of technologies. Driven by the motto of “Going Specific, Deeper, and Unlimited,” Nissei has been engaged in the research and development of injection molding support systems, processing technologies, and other areas. “As one of the materials that support manufacturing and society, we always think about the development of plastics. Since our foundation, we have been working with the idea to make things that we have not been able to make before, do things that we have not been able to do before, and create technologies that are useful for industries in countries and regions around the world,” asserts Hozumi Yoda.

Today, Nissei leverages its technology to take immediate action to reduce the environmental impact of customers’ operations. The company looks forward to proposing solutions to individual customer issues together so that it can achieve the same level of production output as usual with the least amount of energy and resources required.

When it comes to biodegradable resins, Nissei has been developing and researching technologies related to environmentally friendly materials since the mid-1970s. At that time, when the term “environmentally friendly” was not widely recognized, Nissei was able to pursue a specific field because it is a pure-play company focused on injection molding machines. This is not limited to efforts on biodegradable resins, but as an exclusively focused manufacturer of injection molding machines, the company takes an approach tailored to each molding company. Nissei proposes specially customized solutions to the problems faced by each manufacturer, which cannot be copied by major big companies. This is the characteristic of its solutions, which has been appreciated by many customers. “By clearly differentiating ourselves from our major competitors in this way, not only existing customers but also customers who have yet to start doing business with us will soon find our approach interesting. The development of biodegradable resins and the proposal of its solutions are just one example,” remarks Hozumi Yoda.

Illustrating more on the company’s unwavering commitment to achieving harmony with the global environment and technological development, Hozumi Yoda recalls an event in November 2018, the 10th International Aquarium Congress, which was held in Fukushima Prefecture, Japan. The theme of the conference was planetary water pollution, and opinions were exchanged on marine environment conservation and appropriate utilization. The meeting was attended by His Imperial Highness Prince Akishino, a member of the Japanese Imperial Family, and representatives from aquariums in 35 countries and regions all gathered together. The PLA cups, which were molded using Nissei’s molding machines, were used for the toast, and this was an opportunity for the biodegradable resins to quickly gain recognition.

In the same vein, in 2019, the Japanese government took the initiative in holding the “7th Tokyo International Conference on African Development,” at which leaders and other participants were given champagne glasses made by Nissei from PLA as an official souvenir from Japan. In the same year, Nissei also joined the “K 2019 show,” one of the three largest plastic exhibitions in the world, and performed a demonstration of molding 100 percent PLA, displaying the full capabilities and benefits of its environmental technology. Although these events mark a small step, I believe that by promoting the use and spread of biodegradable resins through these opportunities, it will eventually become a major wave of environmental action on a global scale,” he adds.

Nissei is currently working on 17 goals of SDGs to improve the world as incorporated in the “2030 Agenda for Sustainable Development” adopted by the United Nations in 2015. In particular, the company is working to conserve resources, energy and prevent pollution to harmonize its corporate activities with the global environment while actively developing environment-friendly manufacturing. Nissei is also promoting renewable energy by installing large-scale solar power generation facilities at its head office plant. Since the adoption of the SDGs, Nissei has been engaged in awareness-raising activities for reuse, recycling, and the like. “After the adoption of the 2030 agenda in 2015, we have been able to work on what we can do to achieve the targets set for 2030 in parallel with the progress of the SDGs. As a company involved in the plastics industry, we believe that these efforts are our responsibility to society,” expresses Hozumi Yoda.

Description
As a company deeply involved in plastics, Nissei Plastics Industries Co., Ltd. aims to achieve harmony between plastics and the global environment and realize a sustainable society. To respond to the growing concerns around the use of plastics, Nissei has introduced an environmentally friendly molding solution. Nissei has developed “N-PLAjet,” an injection molding system exclusively for PLA that overcomes the issues of heat resistance and impact resistance through research in cooperation with various specialized institutions. Nevertheless, because biodegradable resins are still expensive, Nissei believes it is important for Japan to take the lead in developing laws and using technologies developed by the company to demonstrate to the public the potential of biodegradable resins in overseas exhibitions and international conferences 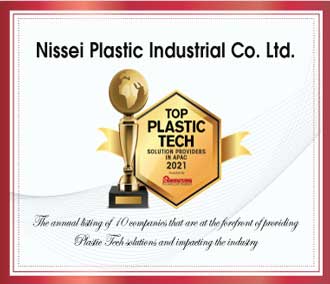