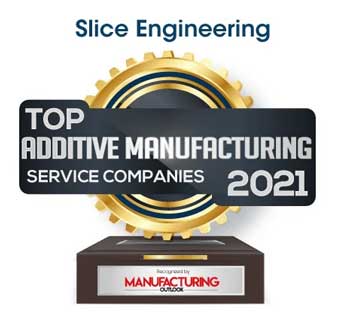 Daniel Barousse, CEO & Co-founder
The appliance and industrial aspect of 3D printing is becoming more of a reality. With the advent of Fused Deposition Modelling (FDM), the usability of 3D printing transitioned from rapid prototyping to additive manufacturing. The massive growth across the additive manufacturing industry in the last couple of decades has diversified the reach of 3D printing to different applications that are useful both from a manufacturing standpoint and for a hobbyist hosting a 3D printer in their garage, office, or homes. The expansion of the consumer base necessitated the need to print high-temperature polymers, where the industrial and personal users were struggling. Realizing the space for metal replacement type plastic, Chris Montgomery and Daniel Barousse founded Slice Engineering.

Established in 2017, Slice Engineering is a component supplier, a unique space in the additive manufacturing industry. “We identified the need for component suppliers who could focus intensively on developing one aspect of the technology - the thermodynamics of melting a thermoplastic,” says Daniel Barousse, Co-founder and CEO, Slice Engineering. “We have engineers and scientists devoted specifically to the thermodynamics of how thermoplastics are melted and optimizing those characteristics in the extrusion process.” Slice Engineering has four patents around their core technology to effectively print high-temperature polymers on a small scale without requiring hundreds of thousands of dollars of equipment.

Slice Engineering has successfully alleviated heat creep, plastic adherence, and flow rate limitations through its offerings. The firm has developed bimetallic heat break technology and two hot end components called Mosquito and Copperhead.The former is for prosumer and industrial line of products focusing on improving reliability and longevity of the part. The product is built with a roll cage around the hot end to prevent damage in the case of a crash. Copperhead, on the other hand, is a traditional design targeted to consumers. It is easy to adapt to an existing printer and can also enhance the functionality of the machine.

Value-added innovation has driven Slice Engineering to develop critical components like nozzles, heaters, and sensors for FDM 3D printers and offered complementary components along with Mosquito and Copperhead.

Mosquito Magnum+ proved to be a gamechanger for the client’s business by doubling their output, manufacturing more products in-house and delivering quickly to their customers

One important thing, according to Barousse, is Slice Engineering’s obsession with quality and quality control. “That’s one of the reasons that organizations come to us because they know that they don’t necessarily have to worry about the parts they receive from us,” says Barousse. “We follow ISO standards and are passionate about quality control.” Perhaps this is why Slice Engineering has been able to cater to the needs of the US Navy, NASA, and US National Labs and SMBs. When a Utahbased small volume manufacturer wished to produce parts domestically with 3D printing instead of sourcing from China but struggled to reduce the per-unit costs, they approached Slice Engineering. The manufacturer deals with aspects for commercial and residential construction and manufactures hundreds to thousands of parts for a specific use case with injection molding. The turnaround time for the print job from some parts was around 72 to 84 hours, and every print failure turned out to be expensive. Slice Engineering brought Mosquito Magnum+ hotend into their machines, reducing the turnaround time to 24-36 hours. “Mosquito Magnum+ proved to be a gamechanger for the client’s business by doubling their output, manufacturing more products in-house and delivering quickly to their customers,” says Barousse. “It allowed for more customization because with a shorter cycle time, there was room for iterative improvements.”

The company has been pushing the limit of what’s possible, and its engineers are dedicated to going beyond the boundaries. Newer solutions in partnership within the industry for cooperative research and development are in the cards. 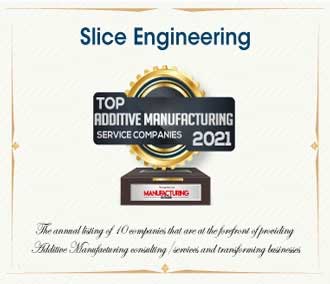